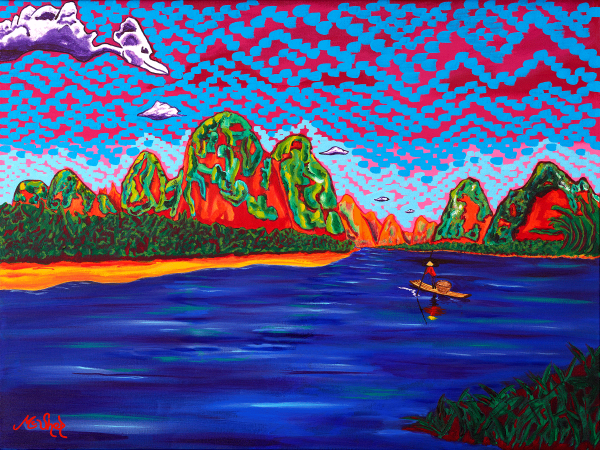 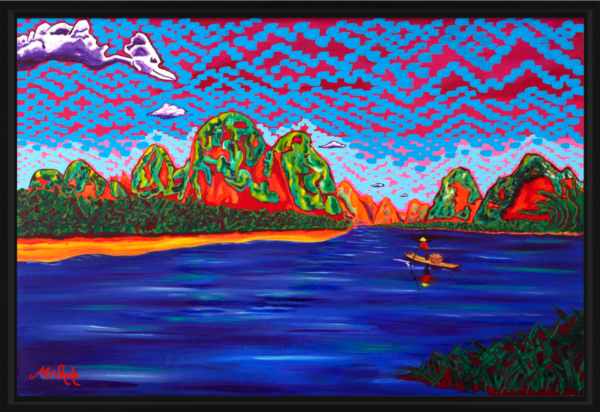 This artwork is available in a BLACK FLOAT FRAME.

Since 1999, this particular image has been displayed on the back of China’s 20 Yuan banknote. It has become an iconic symbol of this vast country’s wealth of natural beauty and biodiversity. This view of a fisherman on his bamboo raft floating down the Li River through the spectacular karst mountains of Guilin is a prevalent scene in this area. So, I thought it would be cool to paint it in my unmistakable style and exhibit it in my next private showing in China. 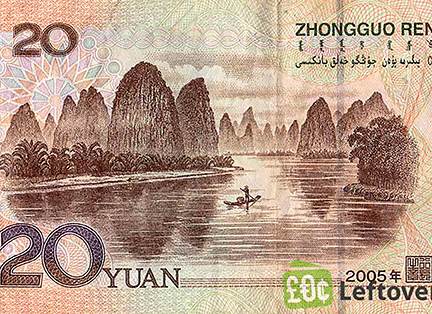 As a Sedona artist, I was invited to show my vivid, mystical landscapes in a private art show in Guangzhou (China’s 3rd most significant city) for private collectors in January 2019. We had the fantastic opportunity to visit small villages in China. In our travels, we stopped in Yangshuo and experienced their electric nightlife pulsed with energy and awe-inspiring old-world Chinese culture. Then from there, we traveled to Xingping Village, that’s where Monolithic China came to life. To learn more, click here.

After crossing the Li River, we were transported in a three-wheeled cart with a motor scooter with a box attached to the rear with seats. Stopping along the way, I saw the exact spot where a Chinese artist, in 1999, had created the image for the back of China’s 20 Yuan Banknote (The official abbreviation is CNY, although also commonly abbreviated as “RMB.”)

In south China’s Guangxi Province, the Li River, or Li Jiang, is in Guilin. National Geographic states that it is renowned as one of “the world’s top 10 watery wonders” near Xingping. It is a paradise for photographers and painters. I was there, took my photo, and felt inspired to paint “Monolithic China.” That’s when I used my artistic license and unique style for my next exhibition in China.

The surreal southern Chinese karst landscape evolved from erosion and formed millions of karst hills and peaks. About 50 miles from Kunming, the Stone Forest extends this other-worldly and richly bio-diverse landscape as part of the South China Karst, one of UNESCO’s 878 World Heritage Sites. The entire South China Karst takes up an impressive expanse of over 341,754 miles, including 7 Karst clusters spanning over 4 Chinese provinces.

Along the Li River, sweet water makes the mountains come alive, while the graceful monolithic sentinels make the water more limpid. There is no doubt that Guilin has the perfect combination of mountains and water. It has stood out for millennia in its profound majesty, attracting people from all over China and all over the globe. These uniquely intriguing Chinese monoliths reflect the monolithic power and strength of the Chinese people. They are deeply rooted in their ancient culture and history. Hence, their power structures and government systems act like a monolith in a field of many other monoliths. Former US President Clinton praised the undeniable beauty of this region, remarking, “No place in China is more evocative of the beauty of your country than Guilin.” The river winds like a green silk ribbon, while the hills resemble jade hairpins.

Subscribe to Clark's quarterly newsletter and be the first to see his newest work and hear about giveaways and sales.

You have Successfully Subscribed!